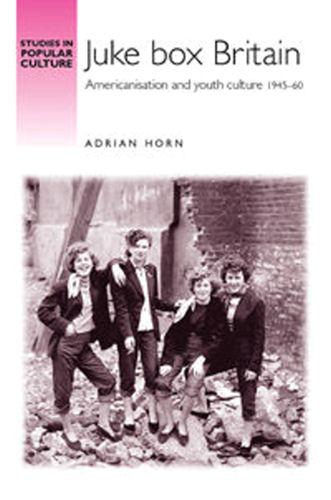 Over the same period there was a similar unprecedented expansion of casual youth venues in the form of cafés, snack, milk and coffee bars where young people could hear the sounds of hot American jazz and rock ‘n’ roll. And if this wasn’t enough, teenagers were earning more in real terms than ever before and spending it on commodities ‘of no lasting value’ like make-up, clothes, records and juke box music. British teenagers following World War II witnessed immense cultural change.

These new forms of youth culture were seen as American, gaudy, a waste of money, un-British and socially retrogressive by culturally entrenched ‘Establishment’ bodies like the BBC, police, magistrates and school authorities. The generational frictions were stretched further by the Teddy Boy subculture which led to a moral panic and general social indignation.

It has been a common assumption among academics and cultural historians alike that British youth between 1945 and 1960 underwent a period of massive ‘Americanisation’. Juke Box Britain contests this view maintaining that American popular-cultural influences were not examples of cultural domination but simply influences that combined with existing styles to create distinctly British style fusions that may now be viewed as quaint and of the period.